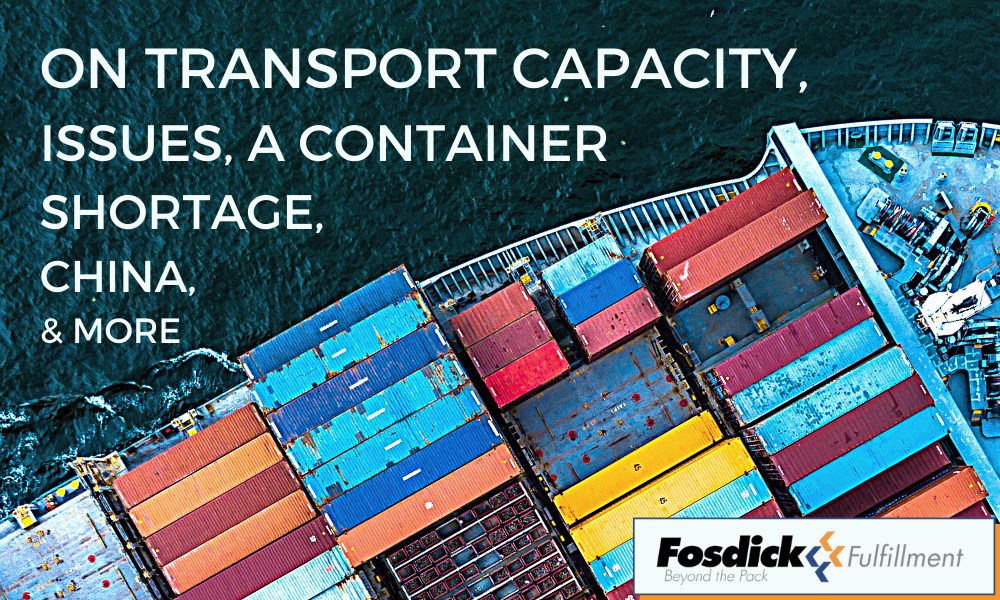 According to a recent Logistics Managers Index report “growth is increasing at an increasing rate” throughout most components of the supply chain. We know what your thinking, but no that redundancy is not a typo. As it turns out, one instance of the adjective form “increasing” just doesn’t cut it when describing LMI index growth of roughly 72% from March to April.  That month long period was the dataset’s second-highest reading in its almost five-year history.

But what the heck is the Logistics Managers Index?

Translation: wholesalers don’t have the bandwidth (or human capital) to keep up with orders. Because of this, inventory is super expensive for retailers.

Warehousing (storage for the purposes of restocking retail shelves at brick and mortar stores) is only slightly more expensive, and retailers would rather just take on more inventory in preparation for peak holiday spending similar to last year’s, which outpaced rising inventory costs through December and into January (aka retailers were still operating in the black and made a bunch of money).

According to the latest Census Bureau statistics, merchants’ inventories-to-sales ratio increased marginally in February to 1.23x from the all-time low of 1.22x in January, but remained considerably below pre-pandemic levels of approximately 1.45x. In April, the total of the LMI’s three cost components — warehouse prices, inventory expenses, and transportation prices — hit a new high, a trend that is expected to continue as long as the consumer is strong enough to absorb at least a part of the cost rises.

“As respondents are not hopeful about significant improvements in available capacity, the combination of growing demand and more constrained supply will likely continue to be a concern moving ahead,” the research noted.

All this to say…

1. That phenomenon detailed above – growing demand and more constrained supply – is essentially what is meant by a “capacity issue.”

2. We (the tangible goods and consumer products space) have a capacity issue.

3. There’s myriad reasons for the capacity traffic slowing down the supply chain – more than we can care to list at once. Instead, we’ve marked factors, which are objectively causal to capacity issues, with bolded or underlined text, like this.

The first of a handful of seemingly isolated incidents stunting US capacity is primarily a global trade issue. We could call it a shortage of shipping containers, but that isn’t exactly the whole story.

Essentially, there’s tremendous demand for products imported from Asia (the electronics, apparel, toys, etc). As a result, these items are subject to massive shipping rates. Plus, smart watches and sneakers are a bit easier to move around the country than bulky agricultural items that account for the majority of US imports.

The United States’ maritime authority will look into whether shipping companies are impeding American farmers’ ability to reach international markets by reserving empty containers needed to export commodities. In a statement released Friday, the Federal Maritime Commission said it would look into actions taken by ocean carriers at the ports of Los Angeles, Long Beach, and New York, citing a surge in imports that has caused bottlenecking at the country’s main export ports and disrupted inbound and outbound supply chains.

Soybean, cotton, timber, and hay exporters in the United States say they can’t get the boxes they need at distribution centers across the country because shipping companies are hurrying to unload and return empty containers arriving from Asia, rather than loading them with American commodities.

High demand from retailers and manufacturers to replenish inventory depleted during the pandemic has driven up shipping rates out of Asia, with ocean carriers charging up to eight times more for Asia exports than lower-value U.S. agricultural goods suppliers.

Since mid-summer, when pandemic-related lockdowns ceased and imports began to surge, the movement of empty containers from the United States has increased dramatically. In October, the ports of Los Angeles and Long Beach handled about 620,000 empty outbound containers, up about 35% from a year before and about 400,000 more boxes than the adjacent ports handled in February.

Freight continues to flow in, capacity does not – TRUCKLOAD INDEXES

Based on the most recent forecasting, we are going to need more and more of those containers that always seem to be on their way back to Asia. Not because we want to build a bunch of tiny container homes (which is a very real thing people do, by the way. See cargohome.com for “elegant” and “efficient” tiny living in the Waco, TX area).

According to the National Retail Federation, each passing week, expectations for future freight increases, and just now, the forecast for inbound containers has been raised once more.

Twenty-foot equivalent units (TEUs) are expected to increase 33.9 percent year on year to 12.7 million in the first half of 2021, according to the group.The group’s previous forecast called for a 26.9 percent increase, and before that, a 23.3 percent increase. Those periods reflect an economy that had mostly reopened following lockdown mandates, as well as retailers preparing for the holiday shopping season.

However, September and October could have an impact on the freight cycle’s growth trajectory for the rest of the year. Inbound domestic container shipments increased 1.9 percent year on year to 22 million TEUs, breaking the previous record set in 2018.

In some cases, the comps stiffen significantly, reflecting all-time highs. As the summer travel window opens, many states will continue to lift COVID restrictions, putting pressure on freight volumes before the fall. Capacity appears to be structurally limited.

What happens to year-over-year comps in the fall is unlikely to matter. Drivers continue to be in short supply as other sources of income (stimulus and enhanced unemployment benefits) are available and comparable labor markets such as construction and warehousing remain strong.  Compliance with the Drug and Alcohol Clearinghouse has also reduced the driver pool.  Carriers rejecting loads under contract continue to account for nearly one out of every four.  A surge in Class 8 orders during the fourth quarter appeared to be on track to provide the industry with much-needed truck capacity.

However, analysts and publicly traded carriers believe it has more to do with buyers snatching up the limited number of production slots available at original equipment manufacturers, who are dealing with production delays due to raw material, part, and semiconductor shortages. With only a small amount of capacity coming online, driver employment dynamics structurally altered, and inventories still in need of replenishment, current fundamentals may not change much even as year-over-year comps become more difficult in the second half.

“We do not expect a large influx of supply as we continue to see production lines delayed, limited driver capacity, which has been further exacerbated by additional stimulus payments, and the continued closures of driving schools, which we believe, coupled with the strong demand environment, will keep rates elevated and propel the trucking cycle for quarters to come,” Shanker added.