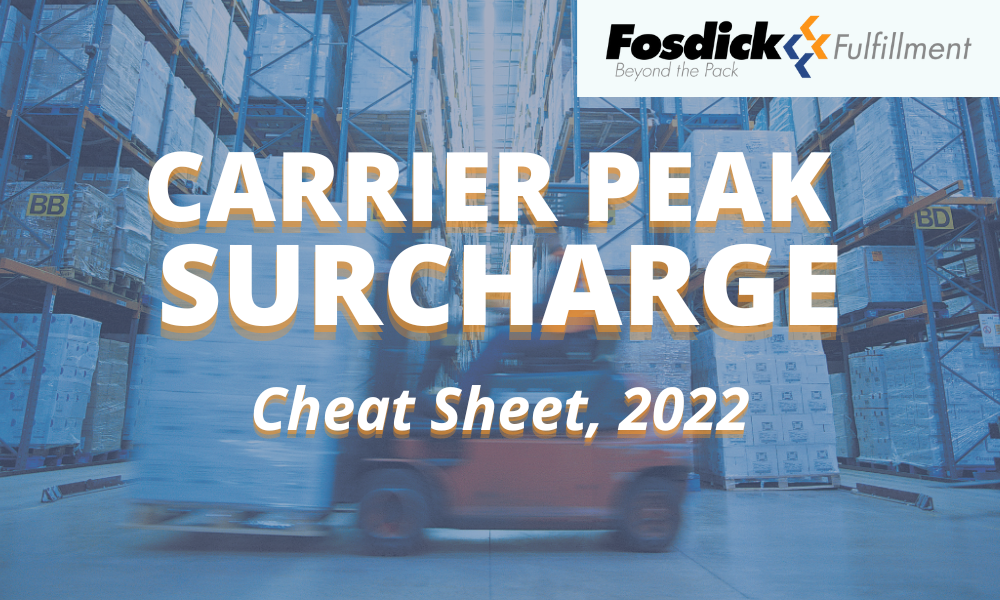 For this month’s #IntheNumbers, we’re taking a slightly different approach and punting on our typical data deep dive. Instead, we’re using our usual nerdy segment to provide some practical info for 3pls, brands, and anyone else who regularly concerns themselves with parcel carrier postage rates.

This post also marks the first of likely hundreds – maybe thousands – of mentions of the “peak season” on the Fosdick blog.

The peak season refers to a period of increased retail order volume during Q4 – roughly from September/October through early January. The uptick is largely associated with a concentration of gift-centric holidays that take place during this period. There are a handful of commercial “sale-days” scattered throughout this time frame – most notably, Black Friday (the day after Thanksgiving, which marks the unofficial start of the holiday shopping season), and Cyber Monday (Black Friday’s eCommerce equivalent).

Of course, as with any good idea, there are offshoots. Prime Day, for instance, is an Amazon-specific version of Cyber Monday for those with Prime subscriptions. For Asian markets, there is also Single’s Day, a sort of anti-Valentine’s Day shop-a-palooza that encourages young, non-married Chinese to celebrate themselves with a little spending spree.

But regardless of who is buying what for whom and why all that holiday buying and sale-day participation has a compounding effect. The result is a Q4 retail surge that encompasses both brick-and-mortar sales and eCommerce order volume. For DTC brands, eCommerce platforms, and those of us that work in supply chain services, as volume increases, so does the demand for parcel services. Suddenly, carrier rates are at an ultra-premium.

And so, it has become that the holiday season is marked, not merely by the first snow of the season or the first holiday lights to flicker throughout the neighborhood, but by the release of peak carrier surcharges.

By this point, all those announcements have been made, and both private and commercial rates are available on respective carrier websites. But public availability and public accessibility are mutually exclusive. Rates vary across product offerings or services and there are often conditions to service levels that did not previously exist.  In some cases, carriers may even create all-new package dimension sub-tiers exclusive to the peak season. All this is further complicated by the fact that per-order surcharges are often designed to evolve throughout the season.

Perhaps the most extreme example is FedEx. For 2022, the carrier has developed a formula that determines surcharge, and subsequent rate of increase over the course of the season for each unique commercial customer. The peaking factor looks at real-time peak volume relative to what might be considered typical volume using specified periods throughout the summer months as control data.

Diametrically opposed to the FedEx formula is the UPS model. It’s certainly possible UPS is using some sort of objective measure to determine peak commercial rates. Customers just have no way of knowing. The company has presented “all-in” peak pricing that is meant to be inclusive of delivery surcharges. There’s no denying how wonderful it would be to see so few line items on UPS peak postage. However, many experts believe “rates in the new program are not as deeply discounted as they are in the original pricing version. The net result is that shippers could easily be paying more under the revised formula than under their original pricing matrix.”

Those are just a few examples of what seems like endless variability. The truth is that it is both extremely difficult and massively time-consuming for brands to forecast expenses this time of year and ensure the bottom line. That’s why we’ve put together our first-ever Carrier Surcharge Cheat Sheet for Brands.

The Cheat Sheet is our attempt to answer the most frequently asked questions regarding carriers and the peak season. In one accessible infographic, we’ve outlined rates and fee structures by carrier, service tier, start dates, and price assessment periods. We have also linked out to the various places where respective information lives online.

It may also be important to note that the carriers and product types listed are not comprehensive.

**Note – Carrier Surcharge Cheat Sheet postage pricing is based on publicly available commercial postage rates and surcharges. The information presented does not factor for fuel, DAS, residential, or any other carrier-specific surcharge beyond those which explicitly include peak increases.

As a relatively new player in the surcharge market, Amazon has gradually increased the flat percentage fees for important services. But for peak, they have a sliding scale that, as you might expect, hits bigger packages with bigger price increases. In addition to the gasoline and inflation surcharges they had implemented this summer, they will also add their peak surcharge, which will further reduce seller margins.

Surcharge in a nutshell: $.35 per item sold through FBA in US and Canada

Like Amazon, USPS will apply a sliding scale that increases the surcharge in accordance with the weight and zone of the package. Flat Rate Boxes and Envelopes will experience significant price increases ranging from $0.75 to $0.95, which will be painful for sellers who rely on these shipping choices to keep their logistics expenses down while marketing low-cost goods.

On the other side, FedEx has more flat costs to add as surcharges, including a $2.50 charge for each Ground Economy package during Black Friday and Cyber Monday. The “peaking factor” computation has also been included, which will be used for their biggest shippers. The more large shippers exceed their summer peak volumes, the more each shipment costs.

Surcharge in a nutshell: Starting at $1.50 and building towards $3.50 per package (flat) + peaking factor.

Similar to FedEx, UPS will employ a dynamic pricing scale that will increase its rates for major shippers when their summer volume considerably exceeds that of the current year. But UPS won’t tack on a flat surcharge to every package, unlike FedEx (and the others).