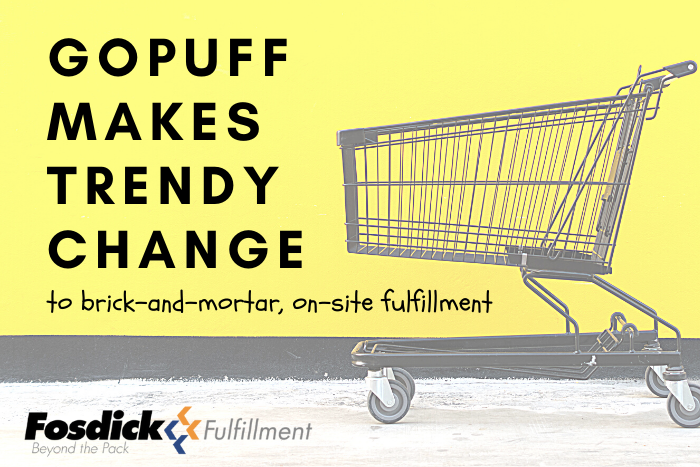 In a trend that sees the online shopping takeover continue to lose its footing, consumer products procurement and delivery company, GoPuff has launched an undefined number of retail outlets. Precipitating another fashionable move from retailers big and small in the time since the pandemic shutdowns lifted, the brick-and-mortar locations are said to provide walk-in service and fulfill delivery orders.

No doubt, the many big-box stores that went to the route of in-house delivery now look like geniuses as the world still recovers from COVID’s impact on supply chains – the most recent side effect of the cracks in the foundation of trade and supply infrastructure is the traffic outside the ports of LA and Long Beach, which have eCommerce more or less stalled indefinitely. All the while, retailers and fulfillers work tirelessly to make good on convenience promises related to accurate picking, careful packing, and timely delivery.

We saw it with Target, Walmart, and the like, as well as something similar from Apply Products. But the major difference between these companies and GoPuff should be pretty obvious.

As per a cursory Google search, “GoPuff is a consumer goods and food delivery company operating in the United States and England. The company is headquartered in Philadelphia and operates in over 650 US cities through approximately 500 micro fulfillment centers as of October 2021.”

The term micro fulfillment is key here. What GoPuff really is, at its core, anyway, or at least what it previously was is best comparable to a door dash or uber eats for daily essential products. Think deodorant and late-night snacks. If you want them, and you want them now, but you don’t want to venture out, or the bodega is long since closed at some un-Godly, early morning, after-party hour, GoPuff is your best, and likely the only option.

But it seems the company has done some growing. And in addition to the launch of its new retail and distribution sites, part of GoPuff’s acceleration towards scale lands the company in the perfect market –  the city that never sleeps.

For all the non-Sinantra/Yankee fans, of course, we’re talking about NYC. Not only does New York not sleep, it’s teeming with direct competitors, many of whom also operate in major European cities.

GoPuff’s ambitious jump off the high dive into the world of direct retail fulfillment and a brick and mortar retail presence in New York promises to test the leading company’s marketing, technology, and assortment as it rapidly scales up and faces growing threats from startups, as well as established retailers.

To generate interest, GoPuff intends to offer a series of local brand promotions on chosen goods over the following ten weeks. The company has grown more in the last year than it did in the preceding three years combined.