In the Numbers | October 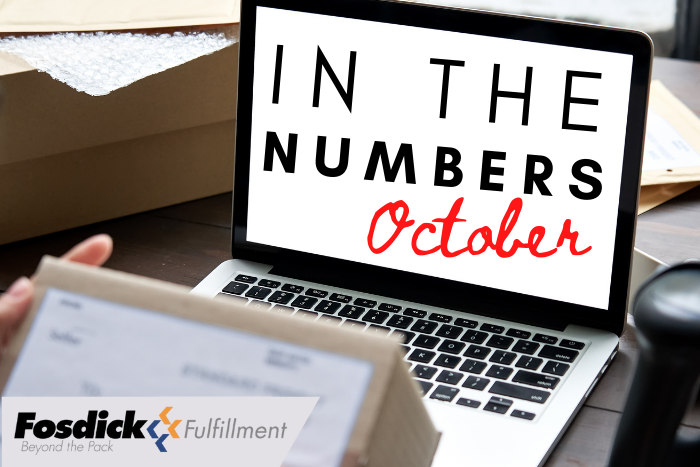 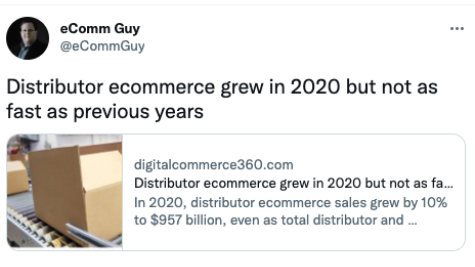 This tweet from @eComm Guy went a little bit viral in the niche social media ecosystem frequented by supply chain and logistics professionals. Certainly, we were hoping for a nice, easy-to-read data set to adequately demonstrate the wild ride of eCommerce over the past few years. But alas, the DIGITAL COMMERCE 360 article, to which the tweet is linked, is more of an overview of the data. Here are some of the highlights… 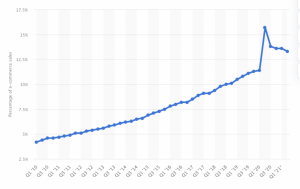 The article then makes its final Call to Action (for the third time) to download the full 2021 Distributor 300 Research Report, which can be yours to reference and eventually lose among hundreds of other PDF files on your desktop for just $400. Regardless, the numbers outlined above do paint a staggering picture of the state of online marketplaces in the wake of COVID-related economic shutdowns. 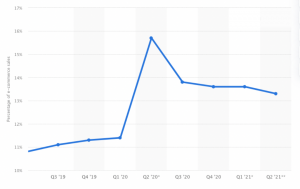 The quick (and perhaps oversimplified version) looks like this: By Q2 of 2020 – the pandemic summer – online shopping growth reached light speed on a crash course toward scale. But in the months following that peak (16% of total retail sales) momentum slowed dramatically. In Q2 of 2021, just about a full year later, the total share of digital commerce had returned to just over 13%. That’s just two percentage points higher than figures from February/March of 2020 when the first significant COVID outbreaks began on the west coast.

Needless to say, the burnout has continued, and for good reason(s). Global trade and supply issues have outlasted the worst parts of the pandemic. Beyond that, businesses reopened; the government issued expansive economic stimulus that put cold hard cash in the hands of American consumers; the vaccine became a widely accessible reality; etc. And so, here we are in the heart of Q3 standing amid the fallout having just witnessed 5 years of eCommerce growth in just the first half of 2020 alone.

Regardless of causality, the leveling-off of online retail has left the record books looking sort of normal. In other words, the YOY increases in eCommerce share of total retail from ’19-’20 and ’20-’21 may end up just two more gradual slopes along a five or ten-year trend. Perhaps what’s more surprising is that the same group of plot points when filtered by retail segment, will actually show less annual growth for 2020 and 2021. That is the crux of the Distributor 300 Report, as indicated by @eComm Guy’s share. An example of this, from the article, are eCommerce markets related to B2B:

More than ever we are in a full-circle moment. For instance, the product space, which flourished and peaked just prior to the pandemic, is in a tough spot right now. This is partly because the cheap-ish digital ad platforms that made customer acquisition feel more like a rigged casino game have mostly been regulated away.

These days, product spaces are saturated, as are the online channels through which young companies tend to want to operate. Instead, as consumers return to in-person shopping in droves, 2021 has been a fight for Big Box shelf space. Perhaps the idea of the digitally native start-up was a bubble always poised to burst, and the pandemic was just the right pin for the job. And we are still speculating with the hypothesis that it is the young companies most affected and that the opposite is true for established digital platforms. In other words, the Amazon’s of the world are always going to continue scaling.

That growth might have returned to normal-ish range, but following a year or so of 5X growth, that let down likely feels less like a disappointment for Amazon execs. The reasons for eCommerce burnout are undoubtedly many, but its hard to ignore the fact that global trade and supply issues have outlasted the worst parts of the pandemic: business closures, reopenings, an economic downturn, and subsequent stimulus, the widespread availability of a vaccine, etc. Perhaps the many new eCommerce believers initially coerced to online marketplaces when their in-person options were taken away have found themselves once again turned off by DTC.

The other big change in what felt like progress, innovation, and the start of a fully automated workforce is the current motion to legitimately reshore manufacturing. We wrote about this in a blog from last month. The short version is that the same family of global trade dysfunction slowing supply chains has also inspired US companies to exit deals with Asian manufacturers (China in particular). Of course, it goes without saying – the implications of new or renewed manufacturing in the US  extend far beyond the supply chain and logistics. Still, if we have learned anything from the pandemic, it’s that when it comes to global economies, despite the patterns, trends, experts, and analysts, the future is never certain.