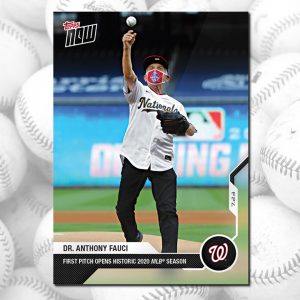 Dr. Anthony Fauci tossed the ceremonial first pitch before the MLB season opener on Thursday night between the New York Yankees and the Washington Nationals.

While his pitch was a long way off the mark, on Friday, Topps awarded Fauci with a baseball card. The card, featured by ESPN.com, shows an image of Fauci on the mound in a Nationals mask just as he is letting go of the ball. Luckily the picture does not show where the pitch landed.

“It went in the wrong direction,” Fauci told The Washington Post on Friday. “I joked around after and said I used to be a shortstop when I played ball as a young boy and I thought I was supposed to throw to first base.”

Fauci received the honor for his service as director of the National Institute of Allergy and Infectious Diseases. His career in the position has spanned nearly three decades over the course of which he has advised six U.S. presidents. Fauci is also a member of the coronavirus task force in the White House.

But his presence at the kick off event for the 60 game, amended MLB season was a reminder that there is no escaping a COVID-19 virus, even amid a restart to sports and a relative return to normalcy for US sports fans. In fact, Nationals star Juan Soto tested positive for the coronavirus just hours before the first pitch.

The game hadn’t even begun when the virus was confirmed for Soto, which has killed nearly 150,000 Americans since last year. Despite this, Fauci said he was comfortable with the league’s safety protocols and never thought about skipping the game.

Fauci didn’t have an opportunity to get loose before he took the mound. Instead of warming up in the bullpen, he spent pre-game autographing shirts, bats and baseballs that will be sent to the Baseball Hall of Fame in Cooperstown, N.Y.

The doctor’s cold arm could partially explain the wayward pitch. But according to the WSJ, Fauci may have also worn out his cannon in the days leading up to opening day when the  79-year-old immunologist went to a Washington, D.C. elementary school to play catch with a local high-schooler. It was the first time he had thrown in decades. He felt good. He felt ready.

Then he woke up the next morning.

“My arm was hanging down around my shoes,” he said.

Fauci grew up in Brooklyn playing shortstop for his Catholic Youth Organization team, the St. Bernadette’s Grasshoppers. Fauci idolized Joe DiMaggio and Mickey Mantle. He studied the batting average of Yogi Berra so carefully that he could recite it down to the decimal point. He was a Yankees fan throughout the greatest era in the franchise’s rich history. And it turns out his favorite team is still the reigning World Series champion.

Fauci became a Washington fan when the team moved to the nation’s capital in 2005. He gets to roughly a dozen games per season, and follows the rest very closely, using the Championship Nats as a respite from his long working days.

His arm was still sore on Wednesday from the game of catch he had a few night’s prior, even after he iced. It was hard for the former player and super fan to fight his nerves as he took the mound. Regardless how empty and quiet the stadium was, Dr. Fauci definitely felt the glare from the millions of eyes watching at home – not to mention all the players from his current and childhood teams looking on as he wound up.

Fauci thought he’d practiced from 60 feet and 6 inches—until he got to the mound and realized he must have had the distance wrong. He decided he’d take a few steps up, put some mustard on the ball, accept the pain that would undoubtedly follow, and hope for the best.

Fauci threw from about 50 feet. The ball made it 40 feet.

“When I saw he was so far away, I said I better try to throw a bullet,” Fauci said. “And that was a mistake.”

But the doctor, called an alarmist by president Trump due to his blunt honesty in public pandemic updates, was able to laugh at himself on Friday as he made one more thing clear: He was feeling better than his arm.

How does the good doctor stack up to the likes of 50 Cent, Carly Rae Jepsen, and Baba Booey? See for yourself.