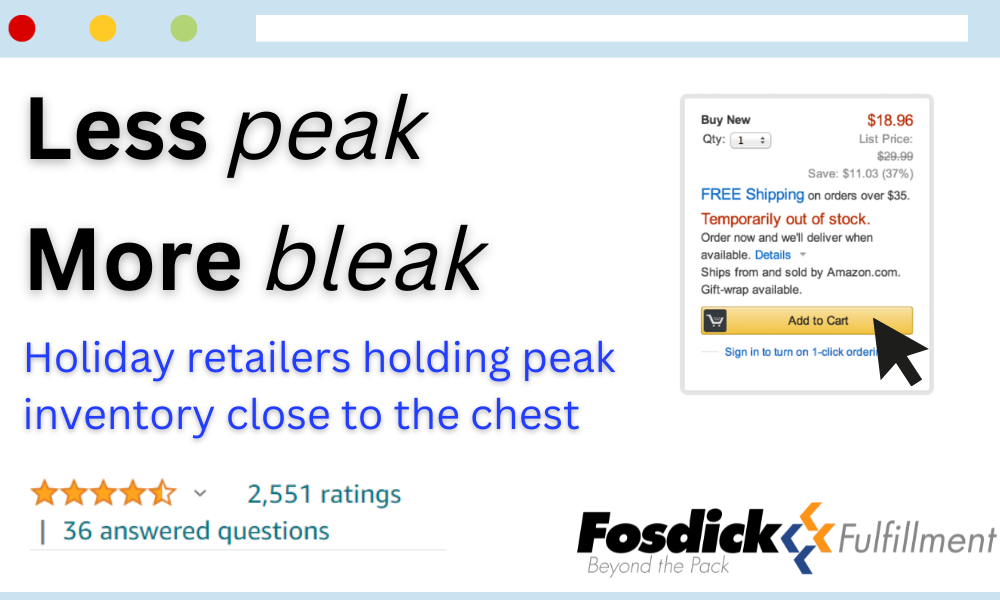 The holiday peak rush is proving a bit anticlimactic for freight companies. As overstocked shops cancel international orders, freighters have lowered their volume expectations leading up to the holiday.

In fact, a number of indicators seem to tell the tale of declining shipping demand across the US. The result is uncharacteristically low freight rates and a dash as carriers reevaluate shipping capacity. No one wants to be the guy sourcing shovels at the end of the gold rush.

According to the Global Port Tracker study, imports into significant U.S. seaports would decline by 4% in the second half of 2022 after rising by 5.5% in the year’s first half. Worried another generational supply chain traffic jam would mean increased lead time and inventory shortages around the holidays, many retailers dramatically reduced their peak season orders this year. In some cases, companies canceled holiday shipments altogether.

The decline in imports is already bleeding over into rail volumes. A recent dip in intermodal operations, a combined truck-rail service favored by retailers, fell 4.8% year-over-year in September. Uncoincidentally that is just an incrementally higher rate of decline than at US ports.

Perhaps the most shocking statistic comes from Truckstop.com, a load board that pairs independent truckers to loads needing transport. According to a report published by the site early this month, spot-market business on the West Coast recently fell to its lowest level since May 2020, and demand in the Southeast “fell sharply after recent strength.”

As the next tier of transport, it seems to make sense that truckers are taking the biggest hit. From the ports to the railways to the trailers, we have pretty much seen a standard 4% decline. At each tier, that baseline reduction has been pretty consistent – a literal example of you-know-what flowing downhill.

It holds true here. The broad “cooling-off” of peak supply chain activity in 2022 is also compounding. Port congestion is looser than one might predict based on the rate of retail imports. Freight volume is just a hair lighter than seaport activity, and the truck capacity surplus is marginally greater than drivers and firms have anticipated.

We’re left with a peak supply chain that behaves like a giant game of logistics telephone. Each time a pallet or container is moved, roughly one percent of the initial message is lost.

So how does this phenomenon play out for brands this peak season? Well, for starters, container shipping rates, which hit a new average high last year, have dropped sharply.

Tom France, vice president of logistics at Trane Technologies, a manufacturer of heating, ventilation, and air conditioning systems, said last month that truckload, ocean, and air rates were falling rapidly. “We are breathing a sigh of relief because rates are coming down and capacity is available,” he said.

“Not only are the steamship lines reaching out inquiring about contracts, but they’re aggressively following up when you don’t get back to them immediately,” Mr. Smith said.

The consequences of an uncharacteristically slow peak season are even trickling down to package transport. Now, in the heart of holiday shopping – a season that accounted for 40% of annual order volume in 2019 – the winds of uncertainty have begun to blow through the high-profit and hidden-fee world of commercial parcel carriers.

Citi issued a survey to shippers this month meant to gauge expectations for Q4.  With the busiest weeks of the year just ahead, and in light of what has transpired in the supply chain this fall, the respondents’ sentiments seemed to split. 22% are still expecting to ship more this year than last year, while with 38% expect that this year will pale in comparison.

As part of the same published research, Citi analysts are  predicting a “weaker peak season and a large amount of uncertainty in terms of the magnitude of demand.”