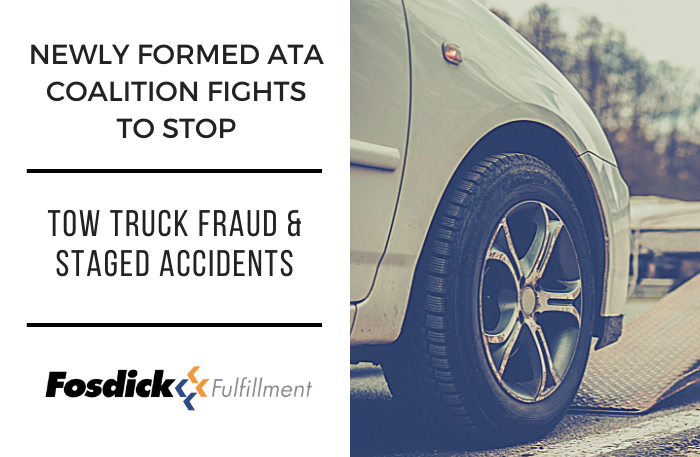 A three-member coalition that includes the American Trucking Association is aiming to combat both towing fraud and staged accidents that cost the trucking industry millions. The ATA joined with two other groups to form the coalition: the American Property Casualty Insurance Association and the Coalition Against Insurance Fraud. The new group (a trucking fraud task force, if you will) does not yet have a name.

Still, despite the lack of decisiveness regarding a catchy, all encompassing name, the coalition has specific recommendations for dealing with tow truck price gouging and fraud with plans to offer a model draft to state legislators.

In terms of addressing staged accidents, the ATA has made no immediate plans to take action in the U.S and believes there are more specific measures that can be taken to combat the towing issue.

Our friends at Freight Waves seem unconvinced. In a recent article, the go-to media outlet for all things freight market offered this list of indictments in the Louisiana staged-accident scam – pretty clear evidence of the potential for a more concentrated legal remedy to the staged accident problem.

And ironically, that same sort of crafty law making is exactly how the ATA plans to wrangle tow fraud. The draft plan the coalition has proposed to legislators includes state regulation that supersedes local authorities.

In a note to FreightWaves, the consortium mentioned various aspects of perceived towing malfeasance that are more or less legitimate. For instance, some companies monitor police scanners for information regarding accidents. When one is identified and the location becomes known, companies proactively mobilize drivers. The practice may not technically be illegal, but the competitive advantage is preposterous.

The ability to supercede local laws is necessary as the ATA works to block members of law enforcement from receiving kickbacks for their referrals. There are documented cases of such occasions when officers have exercised their “discretion over which tow company is called or has some sort of influence over the referral.”

In addition to the ATA (et. all)’s proposition of the model law, the group is offering a guide for carriers on best practices for confronting excessive charges. Some other steps aimed to combat tow truck price gouging include:

As far as staged accidents, the ATA plans to consider how to apply, or at least draw upon Alice’s Law as a model for the type of legal instrument needed to end the practice. Alice’s Law refers to legislation signed in 2019 in New York. Under that law, additional criminal charges can be brought against individuals who cause a staged accident that injures or kills another individual. It was named after Alice Ross, who was killed in a staged accident. Of note, however, is the fact that this relatively new legislation sat in law making purgatory for the better part of five years before becoming law.

In light of this, the group is banking on “getting the ear and the attention of the legislators” in hopes a more universal realization, acknowledgement, and understanding of the issue will take root.

Here are two more stories from this past month highlighting the trucking industry’s bad apples. Of course, the strange thread of April stories is NOT indicative of all LTL and freight service providers. As a 3PL, we rub elbows with drivers and trucking operators daily, and many are among the finest people we know.

As with any story documenting the actions of particularly bad people, what they do for a living is merely circumstantial. Bad people are going to do bad things, regardless of profession. With that said, we are encouraging all subscribers to ground themselves in that sentiment and approach these stories critically, but also objectively. Thanks!

Two long-haul truck drivers accused of kidnapping women and attempting to force them into prostitution or demanding ransom for their return may have additional victims the FBI is seeking to identify.

Brian T. Summerson, 25, of Dillion, South Carolina, was arrested in January and charged with battery, false imprisonment and tampering with a witness. In a connected case, Pierre Washington, 35, of Chicago, was arrested in March on kidnapping charges. It’s unclear how many alleged victims are associated with either charge, however, details have emerged suggesting that number is much greater than law enforcement officials originally suspected.

According to a grand jury indictment, the two truck drivers engaged in the kidnapping-for-ransom scheme from June 2019 until late January 2021. Summerson’s role was to recruit and coerce female victims into prostitution under Washington’s direction.

The FBI was first tipped off about Summerson’s possible involvement in the scheme on Jan. 28, 2020, after a woman in Memphis contacted the FBI, claiming her daughter, who lived in G.V., was in danger. The alleged victims were transported across state lines and held against their will, often physically assaulted. If a victim refused to work as a prostitute for Washington, the victims were allegedly extorted. In some cases, the two men attempted to extort money from the victim’s family for her return.

Summerson worked as an owner- operator leased to New Jersey-based Lavantas Logistics until his first arrest in early February 2020. “We only found out he had been arrested because he was incommunicado and the GPS showed his vehicle was at a law enforcement facility,” says Lavantas owner Mark Willekes.

The FBI is urging possible victims to contact authorities as the bureau continues to build a case. The long-haul driver’s primary route is Interstate 95 from New Jersey to Miami, as well as Chicago and Kansas City, Missouri, it said. To help the FBI identify victims, call the National Suicide Prevention Lifeline at 1-800-273-TALK (8255).

Prosecutors say Ugarte was one of 10 defendants who paid approximately $1 million in bribes to Mower, according to federal investigators. In total, the trucking companies involved in the scheme with Mower raked in more than $280 million total over a 10-year period.

In addition to the bribes paid to FXG, and his participation in the overscaling, Ugarte also admitted to submitting a fraudulent loan application to the Small Business Administration (SBA) through the Paycheck Protection Program (PPP).

The PPP loan program was enacted to help struggling businesses pay employees, interest on mortgages, rent and utilities. Prosecutors claim Ugarte falsely answered no when asked if he was under formal criminal charges in any jurisdiction when filling out the PPP loans application. For one of his companies, Frisbu Trucking, Ugarte received a loan amount of $210,000.

Ugarte is scheduled to be sentenced in both cases on June 3. No trial dates have been set for the other nine defendants charged in the alleged kickback scheme with Ryan Lee Mower. A status conference in Mower’s case is set for May 13.