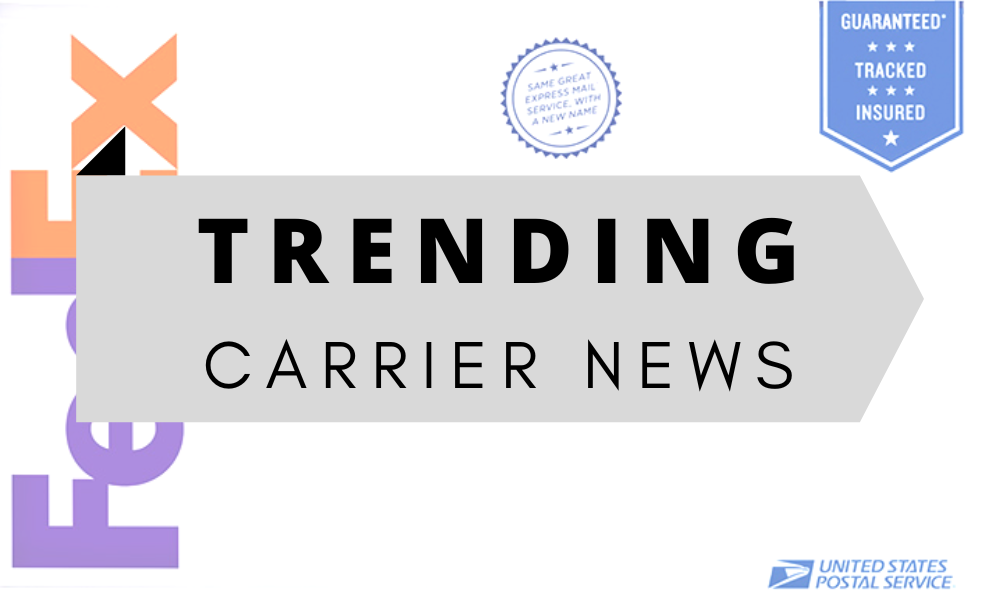 8/25 | USPS INCREASES FREIGHT BROKER SPEND UNDER DEJOY IN EFFORT TO CUT AGENCY COSTS: Public data indicates that the Postal Service has intensified its freight broker spend under Postmaster General Louis DeJoy. The increase in broker deals marks the postal service’s gradual disassociation from many long-standing trucking partners. This is just the latest example of what many believe is DeJoy’s propensity to run the USPS like a business rather than a government agency.

8/29 | FEDEX CUTS TIES WITH ONE OF ITS LARGEST CONTRACTORS OVER DEFAMATION CLAIMS: Spencer Patton’s company is one of the largest FedEx contractors in the United States. He has been outspoken in his criticism of FedEx Ground’s treatment of contractors. FedEx terminated all contracts with Patton Logistics and filed a lawsuit against him, saying Patton has misrepresented the financial hardships of FedEx Ground contractors.

Patton had set a date, November 25, Black Friday, as a deadline for FedEx Ground to make changes. FedEx Ground contracts out 100% of their entire network to about 6,000 small business owners. Contractors own delivery territories, both for last-mile delivery and linehaul. “Most of the United States has no clue that the person coming into your door wearing a FedEx uniform, driving a FedEx Ground truck, is not actually a FedEx Ground employee,” Patton said. “

FedEx contractors spend $15 billion per year on vehicles, fuel, uniforms, uniforms and other items. Amazon has about 2,300 delivery service partners, or DSPs, which operate on a similar model.

9/15 | FEDEX CEO: EARNINGS MISS INDICATIVE OF IMPENDING RECESSION:  FedEx CEO Raj Subramaniam says the company’s most recent earnings report numbers “don’t portend very well” for the global economy. His comments were in response to Mad Money host Jim Cramer’s question about the probability of an economic recession. The Subramaniam interview came after FedEx reported a 21% loss on YoY EPS for Q1 – far below forecasts of an 18% gain. Shares of FedEx fell 15% after the company withdrew its full-year guidance.

9/18 | USPS FOLLOW UPS’ LEAD WITH SPRAWLING HOLIDAY HIRING CAMPAIGN: To prepare for the impending peak season, the U.S. Postal Service (USPS) will hire 28,000 seasonal workers. Forecasters are uncertain as to whether consumers would resume their pre-pandemic purchasing habits in the face of economic headwinds like elevated inflation and interest rates, which have led to the hiring target. USPS’ hiring target comes after reports that parcel delivery company UPS Inc. will hire 100,000 people. Similarly, third-party logistics service (3PL) Geodis will hire 5,000 temporary workers for the busy season. The US Postal Service has announced that it will increase its daily package processing cap to 60 million over the Christmas season from 53 million in 2021. In February, USPS introduced the “USPS Connect” project to better serve its corporate clients. The service offers businesses membership to a delivery network that ensures access to same-day and next-day local delivery, mailing and shipping supplies, tracking visibility, Sunday delivery, and more.

9/23 | UPS ANNOUNCES UNIQUE PEAK SURCHARGE STRUCTURE AHEAD OF 2022 HOLIDAY SEASON: UPS recently introduced a pricing structure that gives shippers a single all-inclusive rate while waiving nearly all delivery surcharges. All customers will have access to the new formula, regardless of the shipping profile. However, some experts have indicated the single per package fee will cost customers more than they might have paid in postage and ancillary charges. Still, UPS is counting on customers becoming so fed up with surcharges that they would switch to a pricing strategy that includes what seem to be slightly higher fees within the base service price. According to insiders, UPS has spent nearly eight years on the idea.