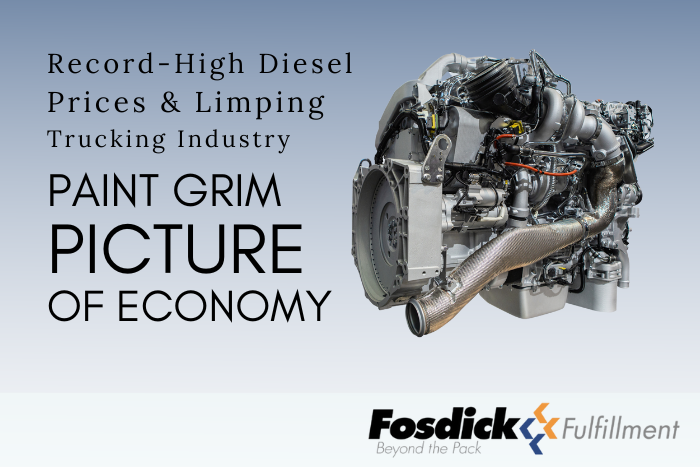 The price of diesel has skyrocketed. Of course, that is not news to anyone, especially readers of this blog.

And while fuel costs have been difficult for everyone, it has been especially challenging for transportation and logistics companies, carriers, independent truckers, and the like. Throughout the sector, businesses large and small have been forced to absorb costs. The extra fuel expense is not just cutting into profit margins but endangering the ability of some firms to break even.

In shipping and receiving and every stop along the way, fuel costs tally like an idling taxi meter. “Moving goods from overseas factories to distribution centers to ports, then facing more delay and more regional transportation when goods arrive stateside, is costly,” says Averitt EVP of sales and marketing, Kent Williams. “Every stop along the way adds fuel costs.”

Rising fuel prices extend beyond the logistics sector and seem to have coincided with a period of economic inflation in America. Across the board, costs of seemingly unrelated goods and services are all skyrocketing. According to AAA, the current average price for diesel fuel is $5.78 a gallon. Meanwhile, the annual inflation rate increased to 8.6 percent in May.

For carriers, fuel is now the second-highest expense on average, second only to driver salary. The added overhead has motivated some companies to take action to lower their fuel use through various means, including driver training and technology.

Efficiency By Any Means Necessary

Averitt Management is paying closer attention to the aerodynamics of their tractors and trailers to maximize fuel efficiency. The company has also put auxiliary power units on their sleeper trucks to provide drivers with access to heat and air conditioning without idling their vehicles overnight. These solutions have had a significant impact on fuel spending overall.

Averitt also supports alternative high-tech equipment options like adaptive cruise control and an autonomous tire inflation system to aid vehicle efficiency. In addition to being aware of the specifications of their equipment, Averitt offers driver education classes to encourage fuel-saving driving practices and uses technology to guarantee the most efficient routing.

Williams claimed that “drivers actually appreciate technology as a whole. They have a keen sense of the fuel cost and are aware of what they are paying at the pump when fueling their own cars and our equipment.”

Meanwhile, shippers play a role in reducing overall fuel spending as well. By improving their processes, the shipping entity, be it a retailer or a distribution center, can help carriers in their attempts to save money and thus, save themselves. 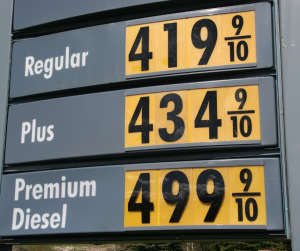 As it is, parcel carriers have instituted new, all-time-high surcharges to cover fuel. These costs are absorbed primarily by other professional services, but ultimately the buck stops with brands and, by extension, consumers. In fact, the current diesel market is the perfect anecdote for explaining the butterfly effect of supply issues on many distinct markets.

Just consider how vital fuel is to our supply chain – the machines that power factories, farms, and trucks all need diesel. In the last year, a gallon of diesel has increased nearly 75%.

Houston independent trucker Eric Jammer, whose truck has 22 wheels, says he burns $5-$700 a day – “minimum.” Military and construction equipment are his specialties. He once transported an Apache. Jammer says he is now exclusively hauling within a day or two from home in Texas.

And even still, you can bet the goods in Eric’s trailer, and the rest of what equates to 70% of all U.S. freight moving through the country, has been priced to offset the cost of trucking.

“Ultimately, you and I as consumers will see this on the store shelves in the price of the products,” says Bob Costello, chief economist with the American Trucking Association.

That’s precisely why, in the case of the energy sector, diesel is especially influential. Now, the latest peak prices are causing a bit of a perfect storm. Diesel fuel prices have skyrocketed faster than gasoline, which has also hit record levels. Both are, of course, tied to the cost of oil as well.

So what has caused such a drastic change in oil supply and pricing?

The symbolic answer is that almost everything felt locally has a source on the global stage. To be more explicit, the U.S.’s ban on importing Russian oil after the invasion of Ukraine has ultimately put a squeeze on fuel.

Diesel Up, Sentiment Way Down

The effects are universal in a situation like the Russian oil ban. When something upon which we are so dependent doubles in value in just a few short months, everyone is affected, from individuals and families to businesses large and small. But there are pockets of industry and a particular subset of workers who are particularly vulnerable to surging diesel costs.

The freight industry, for example, was less than stable long before the Russia/Ukraine war broke out. And yet, for truckers, things only seem to be getting worse. After rebounding slightly in April, the latest data from the Trucking Conditions Index hit a two-year low.

FTR, a freight transportation intelligence organization, said diesel prices stabilized in April, but weaker capacity utilization and freight rates made for favorable but underwhelming market conditions. The near-term forecast is modestly positive, but the Bloomington, Indiana-based business warned that fuel price rises and other variables could lead to further negative readings.

“Recent strong gains in trucking’s payroll employment support our analysis that freight demand has remained solid and that weaker spot market metrics this year indicate a shift of activity back to more normal route guides,” Avery Vise, FTR’s vice president of trucking, said in a release. “Driver availability no longer is the key issue to watch in trucking conditions; increasingly, the principal question will be the resilience of freight demand. Downside risks are high and growing due to inflation and related stresses, but our forecasting model so far is not identifying a downturn.”

For independent truckers, this has been especially true. Chris Tucker moves hot tubs. His network of small trucks liked the gig.

The Kentucky-based owner of Full Coverage Freight, a truck brokerage, recently advertised to truck drivers on a load board that it had a consignment of hot tubs headed from Seattle to a small town in the middle of Wisconsin. Tucker thought the sub $2 a mile rate was low. He anticipated drivers to negotiate $2.50 a mile or $1,000 extra for the gig.

He received calls and texts from hundreds wanting the hot tub job at the quoted rate. In a classic case of labor supply and demand, trucking compensation decreases when the quantity of work does not reflect the number of truckers bidding for jobs.

Hundreds of trucking companies declared bankruptcy in 2019 due to deflated rates. Tucker believes the trucking industry is set to experience another “Great Purge” of bankruptcies. In a June 10 Facebook post on the Rate Per Miles Masters group, which has 33,000 trucking expert members, Tucker warned that many truck drivers who flooded the industry would have to shut down their companies. He wrote that unprepared brokers would also perish. There isn’t enough freight to justify their existence, he said. 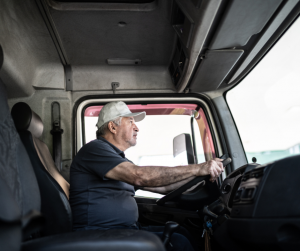 Now, the Great Purge has begun. FTR Transportation Intelligence found a record number of net motor carrier revocations in May. January and March were previous records. Small fleets and single manned operations make up most of the trucking outfits closing up shop. Avery Vise, vice president of trucking at FTR, said many of these drivers would likely join larger fleets rather than leave the market.

But it was only a few months ago that small truckers were making big money. Then, from 2020-2022, there’s a surge of youngsters lining up to become owner-operators. Retailers and manufacturers expected a coronavirus-related economic crisis in March 2020, but consumers bought more.

Retailers with vacant warehouses had to quickly ramp up to fulfill consumer demand for exercise equipment, computer monitors, and toilet paper. New trucking fleets flooded the market to profit from sky-high rates. According to FTR’s Vise, 195,000 additional carriers have entered the market since July 2020. Moreover, 70% of new carriers had one truck. The previous record was 86,000 new carriers.

Rates and volumes have risen in the spot market in the last two years, which is unusual. Then this Spring, spot rates fell, and diesel prices started trending upward. According to the load board at Truckstop.com, it’s 51% more expensive to run a small trucking company in 2022 than last year. Small fleets struggle to keep up with the rising cost of diesel, and many have shut down as a result.

David Guzman is one. “With the rates, you have to run twice as hard to make ends meet,” he said in April. I feel for my fellow truck drivers. And beyond the rates, equipment is more costly than ever. 2021 truck buyers are paying off debts double or triple what is typical. In late 2021, repairs will cost 9 percent more than in late 2020—all with no spot rates to subsidize such expenses.

FTR Vice president of trucking, Avery Vise, said that small truckers are left to give up their power and become company drivers. Others leased their truck to a mega-carrier to benefit from fuel surcharges and diesel payments. Those drivers are lucky. Those that sold their trucks could still benefit from high secondhand truck prices, which are already falling.

So what can we do to make life a little easier for truckers and lighten the burden of fuel prices as those costs precipitate through the economy?

Some shippers deliver multiple shipments to the same consignees on the same day from a single warehouse. For the carriers hauling those loads, merely combining these orders into a single pickup might make all the difference in the world. Sending out more orders on fewer days, such as going from five to three days a week, could also prove to be a successful fuel-saving strategy for smaller shippers with some delivery flexibility.

Other successful alternatives include nearshoring and collaboration between wholesalers and distributors to produce fewer, larger shipments and less LTL volume.

At some point, every participant in the supply chain will feel the effects of skyrocketing fuel prices if they aren’t already. The best approach for weathering the storm is for all companies to work together as partners rather than competitors.