So, why did PayPal ghost Pinterest? Is retail just not ready for social shopping at scale? 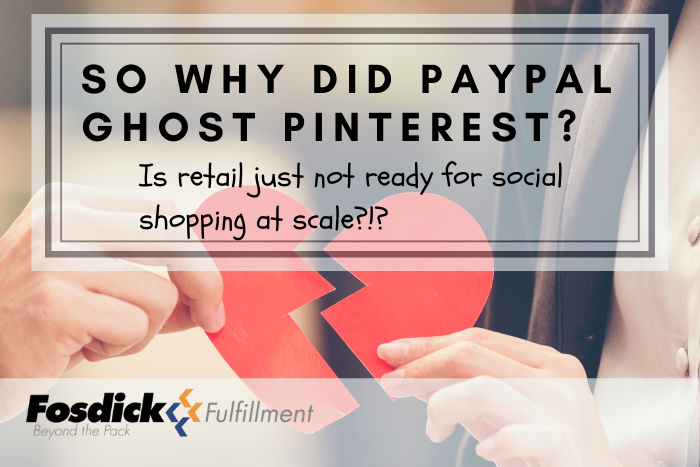 Midway through October digital payment platform, PayPal entered into talks with online photo-sharing platform, Pinterest, regarding an acquisition. But why? At first glance, there’s no doubt the two companies seem unlikely partners, and it is difficult to imagine how the functionality of each would add value to the other.

Pinterest, at its core, is a network that allows users to submit photographs as well as links to recipes, crafts, home decor ideas, and the like. The platform is also known within the world of teachers where it is widely used as a valuable means of sharing lesson plan ideas and classroom activities.

In terms of monetizing the content on the platform, as of right now, if users were to buy a recipe or subscribe to a blog where they encountered the perfect set of plans for a craft idea, they would do so on the host site. Users would have to navigate to this host site through the brand’s Pinterest presence – the graphics it posted to the platform, which more than likely are backlinked somewhere that accepts payment.

It does seem strategic, then, for Pinterest to adopt PayPal functionality that allows for the teacher using the platform to generate curricular materials to purchase those materials directly on Pinterest rather than off-site on Teachers Pay Teachers or whatever company is responsible for the Pinterest post. In this way, the platform (Pinterest) could cash in on a small portion of that transaction as is the model for so many digitally native businesses.

Facebook, in fact, is a nice example of what is possible. The social media conglomerate upped its Marketplace game, extending the service from a more aesthetically Craigslist where users conduct the details of a purchase or sale on the platform and complete the actual transaction off-site, to something that looks a little more like eCommerce.

Nowadays, within the Facebook marketplace, users can make purchases within the digital payment service included within the app or desktop platform, which in theory issues payment directly to the seller.

This has opened things up quite a bit as buyers can now make purchases of items listed out of state as long as the seller specifies their willingness to ship.

The sellers that remain when the toggle switch is set to Shipping Only operate almost like Amazon marketplace sellers. In fact, it is likely that some sellers are on both sites.

Using the Facebook model as a barometer for potential success, it’s easy to see how the digital payment capabilities could benefit the Pinterest platform. That being said, two major uncertainties come to mind:

Side note: what happens to all the Etsy content on Pinterest? Or any backlinking for that matter?

Regardless, PayPal shareholders seemed to have similar questions/apprehensions, though perhaps for different reasons. PayPal’s share price responded coolly to reports of a prospective deal, sending the stock down more than 6%.

Still, many experts still believe, if the two companies do end up hammering out a deal, it will be significant given Pinterest has a market value of almost $40 billion. The company went public in 2019, and its shares have fluctuated over the last year as its performance has been mixed. A Pinterest deal would be one of the largest mergers of the year, at a time when deal activity is at an all-time high with PayPal boldly running into the breach, drawing up as many new deals as it can swing. Just last month, in fact, PayPal agreed to purchase Japanese buy-now-pay-later company Paidy Inc. for around $2.7 billion.

No doubt, the cost of Pinterest would be much greater, and the company operates in a vastly different business. It has, after all, become something of a “social shopping” platform, similar to Instagram and TikTok in this way, which have certainly experienced success as a result of leveraging Swipe Up/Shop Now call to action. Where Pinterest distinguishes itself in the way users are able to build mood boards for weddings, man caves, and latte art for example, all from posts linked to marketable goods and services.

And still, we are (at the time of writing) a little confused as to the response of PayPal’s share price to the deal. This year, social site shopping in the United States is predicted to increase 36% to $36 billion. PayPal’s interest in Pinterest comes at a time when product discovery and purchasing are migrating to social platforms like Instagram and TikTok. And let’s not forget, PayPal still hasn’t integrated with Venmo, which it bought in 2013. If PayPal does buy Pinterest, seamless integration would be key to turbocharging its social media ambitions.

Fast forward, no more than a week, and PayPal officially backed down from a planned $40 billion purchase of Pinterest after investors mysteriously objected. The payment company’s stock dropped about 12% in three days after news of a prospective deal broke.

A deal for Pinterest, with a market capitalization of more than $37 billion, would have been one of PayPal’s biggest ever. It did eventually surface that PayPal’s plan for Pinterest was mostly in line with our assumptions. The payment service would link Pinterest users to businesses and collect a percentage of their buying dollars.

At the time of the deal, Pinterest was making the majority of its money the old fashion way for social media – through ads and the data it could provide marketers regarding users.

Prior to the deal flop, PayPal CEO Dan Schulman said at an investor day presentation that the company wants to nearly double Pinterest’s active users to 750 million in five years. This might boost payment volume, and PayPal would be able to charge retailers for access to their increasing consumer bases.

But, at least for now, the opportunity for a mutually beneficial merger is just spilled milk – no sense in crying, and at least for a time, shareholders, and even some more casual traders, got to enjoy the momentary volatility of the two company’s share prices.

Still, we would not be surprised if this deal or one like it popped back into the zeitgeist in the not-so-distant future – perhaps between Pinterest and another payment platform, like Novi, for instance. Novi is Facebook’s new digital wallet business, which will go live in a trial program in the US and Guatemala. Users may purchase USDP using Novi and Novi will deposit the money with Coinbase. Meanwhile, expect PayPal to continue searching for the right partner with similar social shopping potential – this time, one that shareholders approve of.