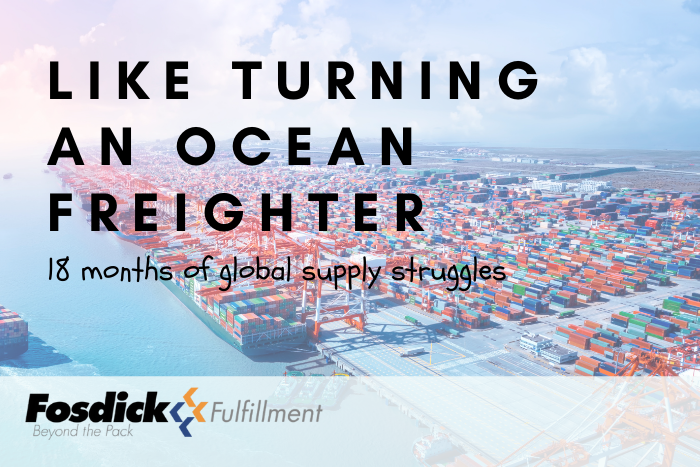 The queue of container ships waiting to enter Los Angeles’s and Long Beach’s neighboring ports hit an all-time high of 65 vessels this past week, and they’ll wait an average of 8.7 days to deliver their cargo. And that’s after nearly four months in transit!

That may sound like hyperbole, but no. The trade route from China to US shores, for example, provides a good barometer for the state of global trade. What is arguably the single most important trade relationship in the world, currently averages 71 days in transit up from 40 days in 2019. The 2X increase in shipping timelines has little to do with the size of the Pacific, which we promise has not become twice as vast, and there are certainly no trade winds at sea level to take the blame.

It’s also not as simple as to say the delays are a consequence of traffic at US ports. What is more true is that the backup of ocean freighters outside of California is quite indicative of something malignant and widespread across every phase of supply chains.

Let’s backtrack – the onset of the pandemic and subsequent lockdowns, both in the US and abroad,  necessarily marked a massive increase in online shopping. In the US especially, as those businesses reopened, it became clear consumer behavior had changed permanently. Americans, many of whom who previously would have described themselves as exclusively in-person shoppers, had grown to appreciate the convenience of eCommerce and the safety assurances shopping online provided.

Boomers and Gen X’ers – digital foreigners who at this point likely found themselves lost in translation – spent the quarantine building the literacy they’d need to fully participate in a new era for eCommerce. Soon they’d regard those few weeks of uncertainty navigating digital marketplaces as a worthy price to pay for a lifetime of upside. In other words, COVID served to change the way those folks thought about and used the internet, validating digital retail platforms as practical tools for the generations of Americans who’d grown up on the internet and converting a good portion of the rest.

And so, the massive spike in online shopping volume that was supposed to be temporary never really leveled. On the contrary, online shopping jumped ahead as much as five years in terms of the share of total retail attributed to eCommerce. An increase in order volume would mean shortages across every marketplace imaginable, many of which persist today.

In fact, product inventory is so limited, raw materials so scarce, that even the highly topical, literary, and sometimes satirical  New Yorker is reporting on the supply chain. In an article titled “The Supply Chain Mystery” published in the magazine’s Oct. 4th issue, writer Amy Davidson Sorkin asks:

What are these supply-chain issues, and why, more than a year and a half into the pandemic, do they keep popping up in so many corners of life?

The writer goes on to mention a series of product categories that remain affected including, but certainly not limited to:

Sorkin continues, “Most items are, ultimately, available,” writes Sorkin,  “if at a higher price; during the past year, the Consumer Price Index has risen about five percent, double the percentage it rose in the year before the pandemic.”

Inherent to rising costs on the consumer end is the B2B response that supports supply chain infrastructure – the manpower, parcel materials, trucks, warehouse space, containers, and carriers that play a role at various points between order and delivery. Note: The New Yorker Article does eventually touch on the traffic in California’s ports, citing another issue entirely – the fact that “there aren’t enough dockworkers to unload their cargo, or enough truck drivers to move it out of the ports,” which of course drives the costs of that labor as well.

What is also true is that no supply chain service is scalable in the same way as manufacturing, for example. In some ways, factories can ramp up production, but an ocean freighter is a very limited resource.

It is in times like these – when demand and scarcity converge in an industry, or across many – that a certain type of tenacious businessperson thrives. For example, the 100-year-old shipping company Euroseas. The company out of Athens, Greece recently announced a record-setting charter contract at a rate of $200,000 per day with a 60-day minimum.

Senior container market analyst at Alphaliner, Charles Mercier, summed up the current state of shipping, conceding that while the Euroseas price tag, ultimately there would be little to no effect on shippers’ bottom lines. Charterers “are of course going to pay a fortune in hire,” said Mercier. “But at the same time, they are making a lot of money on the cargo side — the rates on the cargo side is incredible and continue to rise — so that even while they are paying astronomical charter rates, they are still going to make a substantial profit.”

But as you continue to follow the money along the supply chain, eventually the buck stops. Back outside the California ports, traffic makes the 5 Freeway to San Gabriel River, rated the worst traffic corridor in America, feel like open road. The more time ships sit at the port, the longer customers wait for the products they’ve ordered regardless of how inflated the price at check out.

The effect is widespread, but some product categories (and subsequently, the marketers and consumers of said products) are worse off than others.

Take shampoo for instance: According to Covid-19, labor limitations in Malaysia have led the price of palm oil, a major component in everything from biodiesel to shampoo, to rise by up to 70%. Another example is the coffee trade. Travel restrictions in Vietnam are increasing the cost of coffee beans for businesses such as Folgers and Peet’s. Of course, caffeine inflation begs another important question: mainly why are we not drinking 100% Columbian like Juan Valdez told us to? Lesson learned.

Now with the holiday season approaching, it is difficult to know how supply chains will fair. Look for big box stores and in-person shopping to reign to make up a few furlongs in the retail race this winter. As shipping timelines grow longer for online purchases and platforms break the promise of speed and convenience, retail is primed for a complete full-circle moment.