The Rent the Runway rental model made logistics look easy. Then, came COVID… 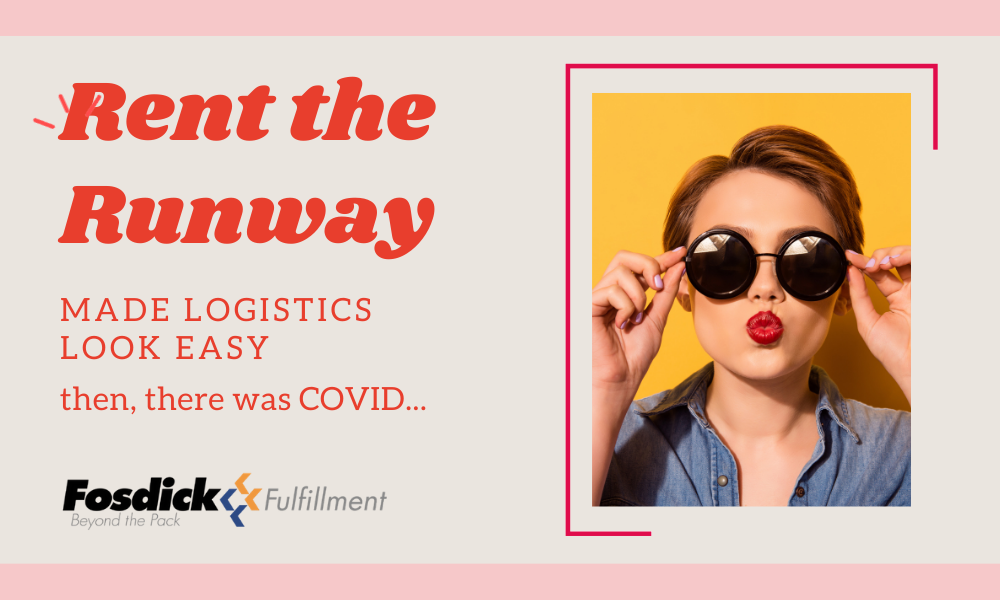 Fosdick Feature: The most Impressive thing about Rent the Runway might actually be logistics

Logistics took on new meaning in 2020 as companies in retail, tech, eCommerce (or some amalgamation of all three spaces) worked to meet the demand of online sales. In particular, Rent the Runway let the world in on the massive infrastructure it has amassed in a Business Insider article from March.

Not surprisingly, apparel start-ups have begun to replicate the RTR model – a peer-to-peer/rental subscription. These companies run the fashion gambit – from work apparel to lux brands to plus sized and more!

And now, with so many players in the space, we are beginning to  notice opportunities for third-party support. We are not the only ones – the RTR model necessitates a very particular set of services. Companies like Caastle and Trove are stepping up as leaders in what seems to be the beginning of this all new logistics sector.

“Clothing rentals have gone from something a couple of startups were doing to something being adopted by old-school retailers,” says CaaStle founder and CEO Christine Hunsicker. She would know: In 2012, she launched Gwynnie Bee, a subscription service that now offers clothing rentals from more than 150 labels in sizes 0 to 32. But Hunsicker saw even more opportunity in helping retailers and clothing brands create their own rental services. Her two-year-old CaaStle logistics platform integrates with companies’ inventory systems and manages the entire rental process on their behalf, from warehousing and cleaning garments to gathering feedback from customers about how an item fits.

Trove operates as the back end for brands to buy back items from the general public, refurbish, clean, and resell the items at a fraction of the price. This is especially appealing for brands hoping to increase their sustainability and lower their environmental footprint. Trove’s partnerships such brands as Patagonia, REI, Eileen Fisher, Arc’teryx, Taylor Stitch, and more

Around the same time as the BI article, The Verge published a piece rehashing the brief history of Rent the Runway’s foray into physical retail and the ultimate decision to shut down operations. During a Zoom meeting with retail staff, a company executive said the business has been forced to “dramatically reassess” its current operations in response to the coronavirus pandemic  in order to sustain the business.

“All teams at RTR are being impacted in some way today,” she added. “With the current uncertainty and continued government restrictions that are aimed to protect public health during this unprecedented pandemic, we have no visibility into when or if we will be able to reopen our stores. As a result of this, all retail roles are being eliminated. This was a heartbreaking decision.”

After years of building out a network of drop off locations and successfully managing a series of pop-up shops, the first standalone RTR store opened in New York in 2014.

RTR’s retail stores were supposed to provide a way for new customers to discover Rent the Runway. The stores allowed women to try on dresses before renting them. However, Hyman and Fleiss found that more than 90% of visitors to Rent the Runway stores stopped by just to pick up or return items they’d rented.

In other words, the physical storefronts that rolled out across the country throughout the next half of the decade were less about actual retail and more of a strategy for creating a public facing identity that allowed the brand to enhance its customer experience.

For companies like Rent the Runway that operate mostly online, closing retail locations was a necessary choice. “Rent the Runway has always been a little too good to be true,” a former retail worker told The Verge. “We’re not selling anything, there’s not a lot to do in the store.” She asked to remain anonymous because her severance was conditioned on signing a non-disparagement agreement.

According to a Retail Touch Points Report from August of 2020, the company decided to permanently close five of the inactive stores. While the company is leaving its locations in Chicago, Los Angeles, San Francisco and Washington, D.C., the former New York City flagship will become a drop-off site for returning items.

Beyond just the storefronts, though, the second half of 2020 and the fall out of the COVID-19 outbreak is threatening the long-term viability of rental fashion. Increased  awareness about virality, as well as a shift in fashion consumption since the onset of the pandemic, has raised questions about whether the business model is as financially sound as other similarly praised circular business models.

The coronavirus has massively influenced the way people have chosen to dress, as many will have spent large parts of their year at home. In October, Primark highlighted how its suit sales had plummeted whilst pyjamas had comparatively proven popular.

It’s forced rental fashion providers to think on their feet if they were to stand any chance of making it through what has been an unpredictable year for all.