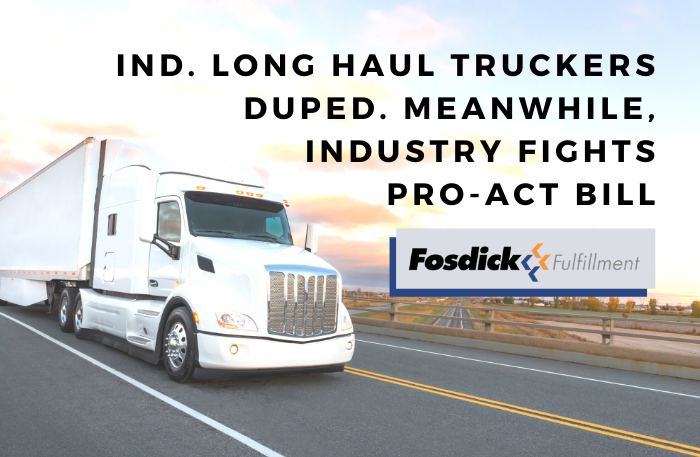 We’ve read plenty of stories this year about the hardship facing independent truckers in the modern trucking industry. Most notably, this NPR article (it’s possible we originally heard it in the Planet Money podcast iteration, but we weren’t’ able to track the audio back down).

The article outlines the story of Kim Sikorski who In 2017, decided she was going to become a trucker. She called Prime Inc. – no relation to Amazon Prime – because they offered free training. Prime seemed eager to have her.

Kim talked to Prime on a Thursday night, and reports the company rep who initially courted her expressed intentions to put Ms. Sikorski on a greyhound bus for Sunday morning to begin training the next day. Kim trained for three months with an instructor before her first solo mission, but just before she left the Prime nest, she had a choice to make.

SIKORSKI: So you’re given the option to either be a company driver or a lease operator.

In other words, Kim can operate on behalf of Prime as a regular, good old fashioned employee, with a compensation structure that is based primarily on miles driven.

Or…she could buy into the “be your own boss” sales pitch, a prospect wherein Sikorsky would lease a truck through Prime, earning a portion of her truckload each trip.

Kim chose option two, fully enticed by the prospect of entrepreneurship, which in retrospect seems to be exactly what the company wanted.

Soon after her first run, when the checks started rolling in, it became apparent to Ms. Sikorsky that the fix was in.

Instead of the percentage of trucking she anticipated, her paystubs reflected values sandwiched by brackets (aka negative numbers). In other words, she owed Prime money!

Long story short, Prime was deducting truck payments, insurance, equipment costs, and the company’s percentage as a broker PRIOR to issuing any profit share to contractor truckers as vendors for their services.

Which actually isn’t unreasonable. What is unreasonable, however, is that the respective costs of each of the above seemed to total up to significantly more than what Prime knew to be the ultimate profit share, and subsequently, what contractor drivers anticipated earning.

In the spirit of eventually making a point, we’ll skip to the “where are they now” text that runs at the end of historical fiction movies just before the credits…

The Kim Sikorski story and her showdown with Prime leaves the scoreboard reading 1 to zip with independent employment structure firmly in the losers column. But there is some nuance to the battle between contractors and employees as far as trucking goes.

Exhibit A is the Pro-Act, a bill reintroduced last month after it was originally passed by the House Democratic majority in February of 2020. The initial bill stalled in the Republican-controlled senate.

But now, with a Democratic controlled house, senate, and White House, the bill, which trucking groups say is poised to dismantle the industry, has a real chance at passing.

This is that threat to the trucking industry that threatens the way this industry has been developed for the last 100 years, Dave Heller, vice president of government affairs for the Truckload Carriers Association (TCA) told Transportation Nation Network (TNN) this week. This is one of those the full industry can get behind and oppose. I don’t think there is an [trucking] organization out there that would be in support of this.

The bill has been opposed by the majority of large trucking organizations, but defeating it will be a difficult task. Some business experts call for the industry to band together in opposition to the regulations. Proponents of the PRO-Act contend that the bill is about the way private contractors are often misclassified and subjected to labor violations – contractors like Kim Sikorski for instance.

Transportation Nation Network spoke with several reliable sources on Capitol Hill who have confirmed that once the bill reaches his desk, President Biden will most likely sign it. The bill would almost certainly pass the House, but the actual fight will be in the Senate.

Democrats still have some work to do in such a tightly separated chamber (50-50), but the trucking industry is not taking it for granted.

According to TNN’s John Heller, the trucking industry must find a way to make the bill obsolete and become statute.