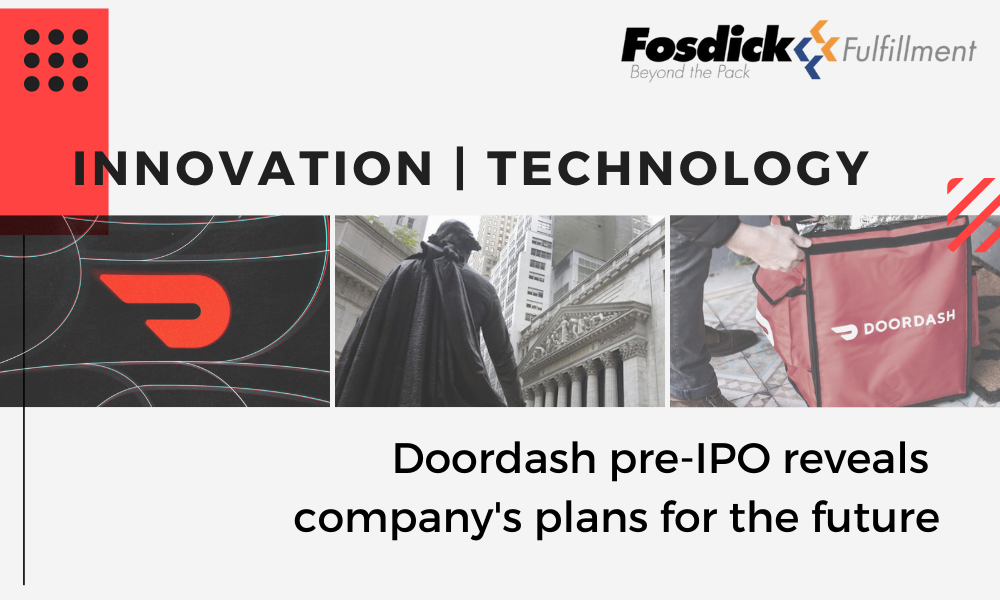 DoorDash released its IPO paperwork this past Friday, with an ask of nearly $400 million of investors. This would value the food delivery company at right around $16 billion.

DoorDash was also able to boast its place as the #1 food deliverer in the US with 50% of the market share. UberEats controls the next largest portion of gig food delivery at 26% (soon to be 32% after the ink on a Postmates  acquisition dries).

The S1 goes on to highlight sales growth year over year that has tripled to $1.9B from January to September compared to the same period in 2019. DoorDash currently has 18 million customers for the 1 million Dashers and 390 merchants enrolled through the DoorDash platform.

The company’s shares will be listed as DASH on the New York Stock Exchange, which we concede is a pretty cool ticker. There will be three classes of stock A, B, and C, and each level will possess less and less voting entitlement.

Now to the important part…

DoorDash is going all in on all things delivery – a philosophy they have trademarked as “Delivery Everything.”

In addition to grocery and food delivery, DoorDash will attempt a foray into a few other last-mile markets made possible through some strategic marketplace partnerships including:

The idea behind this shift is to reduce what the S1 sort of hilariously refers to as “promiscuous” customer behavior, and yet we know exactly what they are talking about. Not because we are in the same business (We aren’t yet), but because at Fosdick every millennial in the office has both DoorDash and either UberEats, GrubHub, or both on their phone right now.

Then every once in a while, you find restaurants that are exclusively integrated with a single delivery service. In fact, sometimes a restaurant’s unique “profile” on a food delivery service platform is the establishment’s only real online presence. When that is the case, it begs an interesting question that sort of points out some flaws in the way DoorDash is thinking about their future of their business.

For instance, let’s say that Customer A orders a meatball sub every Friday night from Pizza Place A. At some point, after the launch of DoorDash, Pizza Place decided to sign up as a DoorDash merchant.

Awesome news. Ordering just got that much easier for Customer A really hates getting stuck on hold when ordering food in the middle of the Friday evening rush.

And yet, that rarely stopped Customer A who has been eating the meatball sub on Fridays for as long as Pizza Place A has been a DoorDash merchant.

While it may look to DoorDash that Customer A is a loyal customer what the data does not show are the many years Customer A made that same exact order over the phone. So where do Customer A’s real loyalties lie? Certainly not with DoorDash.

It’s also like saying people buy Harry’s Razors because they are loyal to Fosdick. As much as we’d love for that to be the case, it’s just not true.

However, if and when DoorDash begins to operate as a last-mile fulfiller, then it can begin to look at customer loyalty as a viable metric for the health of the business. The reason for this shift is that as a third-party service working with mom and pop shops, as one example, the customer is the merchant and not the individual consumer who is more than likely just following their instincts, wallet, or taste-buds in the majority of purchasing decisions.

We believe that it won’t be long before DoorDash starts to look a lot more like Ship Bob then like GrubHub. Here’s all the evidence we need: the S1 mentioned “food” 169 times in its S-1 and “logistics” 200 times (#priorities).

But there’s no one driving the car? How do I know who to tip?

There are some other interesting tidbits in DoorDash’s prospectus, including its history of net losses, a warning that it may struggle with profitability, and its future plans to use drones and autonomous vehicles.

Looking ahead, DoorDash said that autonomous and drone delivery technologies could have a meaningful impact on the food-delivery industry. The company partnered with GM’s Cruise Automation last year to test food delivery with autonomous vehicles in San Francisco.

“We have invested in and we expect to continue to invest in research and development related to autonomous and drone delivery technologies, either directly or in partnership with companies that develop such technologies,” according to the prospectus.

This got us thinking two things: 1. Has the R&D solved for the issue of who brings the food from the car to the door and if not, then 2. What happens to Dashers?