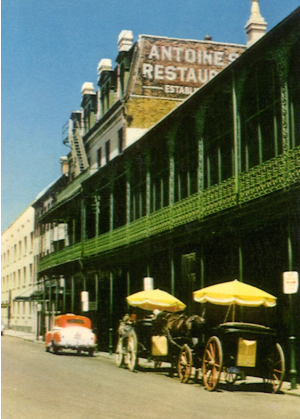 Ever nostalgic and admirers of all things historic and lasting, at Fosdick this one hits especially close to home.
Antoine’s is the single most important establishment in New Orleans, and possibly beyond. The French Quarter landmark began as a boardinghouse opened in 1840 by Antoine Alciatore, an immigrant from Marseilles.

Antoine’s is stitched into the fabric of the city – its significance demonstrated by the fact that the restaurants founding is featured for the year 1840 on this PBS American Experience Timeline.

Since then Antoine’s and the city of New Orleans itself has been no stranger to crises. Here’s a short list:

Now, Antoine’s is faced with another test in the coronavirus pandemic. The restaurant is struggling a bit right now (the entire industry is). Still, they persist.