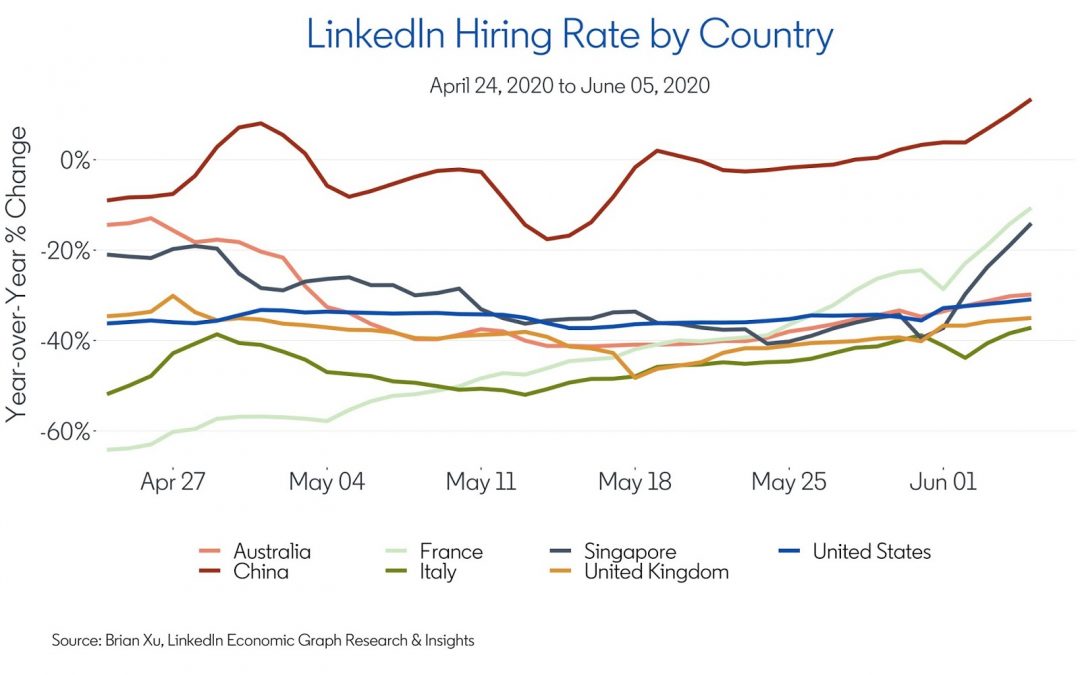 Finally, some good news for the economy as global hiring shows the first signs of recovery. Research and Insights at LinkedIn published this graph yesterday (June 11), which was ironically one of the worst trading days on Wall Street since mid-March.

Here are the highlights:

Yes, more data is still needed. Much is also still dependent on whether or not there is a resurgence of the virus in the fall.

That said, the initial report has provided a somewhat more precise picture of what to expect for a return to work, both now and following a potential second strain. In LinkedIn’s research, trends indicate gradual increases in hiring, starting four to six weeks after lockdown measures relax.

A critical part of initial recovery and long term job stabilization in the world post-lockdown is accepting and embracing some permanent changes to the way we work. We have talked a lot about the way coronavirus has expedited the practical application of tech, and as such, those skills are more important than ever before.

It is also likely that employers begin to downsize in-person teams. Lockdowns have forced companies to evaluate the full scope of operations through the remote lens. In some cases, managers are seeing increased productivity in areas where they had not previously considered remote work.

On the other hand, there are plenty of non-essential workers whose jobs and corresponding skill sets just don’t fit in the remote-when-possible, contactless, tech-forward vision for society. The latest data from the LinkedIn Workforce Confidence Index shows many of these workers have used their time in lockdown for some remote reskilling.

In public administration, 32% of online learners cited the desire to open new career paths as their reason for taking an online course.

Other industries where workers reported reskilling for a career change include design (32%), retail (31%), entertainment (28%), nonprofits (25%), and media and communications (25%). While the potential elimination of jobs might seem sudden, we should not feel completely blindsided. In recent years, workers in industries like mining, manufacturing, and trucking have become increasingly concerned about the implications of automation.

That conversation got heated (and political) with the circulation of Learn to Code memes in 2016. More recently, Andrew Yang campaigned for the Democratic Primaries on a platform that stressed the importance of reskilling individuals in jobs ripe for automation.

Then there are the many examples of working automation, so baked into society, we fail even to notice. Self-checkout aisles, mobile check deposit, Elon Musk, and Amazon warehouse bots have been breadcrumbs on the trail – warnings of looming obsolescence in many more job markets to come.COVID-19 may not be the catalyst for change in jobs that we were expecting, but with global health at stake, concerted efforts towards scaled automation and a tech enabled workforce seem justified.